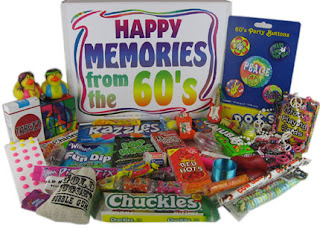 When it comes to selecting a gift for someone special, a good choice is often something reminiscent of their past. Every generation has its own special moment, a time that’s looked back upon with warmth and fond memories, a period of youth and innocence before the serious business of earning a living and making a mark on the world became pressing matters.

For the generation growing up after World War II and the conservative 1950s, the so-called Baby-Boomer generation, those days were the flourishing, creative, controversial 1960s. It was a period in American culture that saw a dramatic growth of music, art, social consciousness and technological achievements. Television entered our homes in black and white then burst into colors, becoming the mouthpiece for fashion, products, news and entertainment as never before.

Now, forty years later, fans of that time are clamoring for memorabilia. 1960s gifts are more popular than ever, not only among adults who grew up during those years, but among a whole new generation of young people who’ve found a fascination with retro-style and the iconic art and fashion of the 60s.

From metal lunch boxes depicting classic 1960s television shows to games that tied us up into knots and sent girls on mystery dates; from love beads and psychedelic posters to Nehru jackets and tie-dye shirts, 1960s gifts have a unique way of capturing that moment in time when youth seized the attention of society and made a statement to the world.

Genuine articles from the 60s are in big demand and can fetch a high value among serious collectors, but many retail outlets and websites today offer a large assortment of reproductions that can still satisfy the nostalgia buff’s appetite for souvenirs from that era.

Music played a major role during that decade, springing from the controversies and trends of the time. Its sound was not only an echo of the new generation’s dreams and ideals, but a driving force behind some of society’s important changes; songs about peace and love, the Vietnam War, the drug culture and social inequality, all painted a picture of a generation bursting to fruition and challenging the established norms and limitations of a generation that came before.

Of all the gifts that could be cherished and enjoyed for years to come, the gift of music might be the most valuable and rewarding. While vintage LP's in their original jackets are becoming more and more rare, modern day collections of classic songs are available now on CD's and in digital format.

So whether you’re looking for an Elvis Presley coffee mug, a scale model of the original Starship Enterprise, an eye-popping Peter Max poster for a loved one’s wall or even just some candy or toys from that era that isn’t commonly found, chances are there’s someone out there who has it. A brief search of the internet for 1960s gifts should turn up some retailer or aficionado who has just what you need to bring that special, groovy feeling to someone’s heart.