We love celebrating our favorite musicians’ birthdays! Today, March 30th, is Eric Clapton’s birthday. He’s been part of the rock and roll industry for years… and we think he deserves a treat. (We’d love to send him a box of retro candy if we knew where he lived!)

Eric Clapton Trivia:
• Clapton is the only three-time inductee to the Rock and Roll Hall of Fame. As a solo artist, as a member of The Yardbirds, and as a member of Cream.
• His version of “I Shot the Sheriff” helped him gain popularity in the reggae market.
• He founded the Crossroads Centre of Antigua, a facility for recovering substance abusers.
• Clapton’s biggest influence is Robert Johnson. In 2004 he released a CD and DVD on which he covered Johnson’s music.
• He ranks fourth in Rolling Stone magazine’s list of the 100 Greatest Guitarists of All Time.
• Who’s been influenced by Clapton? Too many musicians to count! But among them are: Richie Sambora, Stevie Ray Vaughn, Eddie Van Halen, Brad Paisley, John Mayer, and Joe Bonamassa.
• “Tears in Heaven” won three Grammy Awards: Song of the Year, Record of the Year, and Male Pop Vocal Performance. He also won Grammies for Album of the Year and Best Rock Vocal Performance for his Unplugged album, and Best Rock song for “Layla.”

Happy 66th birthday, Slowhand! (Seriously, we’d send you a birthday box of retro candy if we knew where to ship it!) 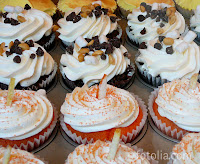 We’ve got great Over the Hill retro candy gifts here at Woodstock Candy… but some people just never learn! We’ve got a few of the worst over-the-hill gifts that anyone has ever given. We feel sorry for anyone that was on the receiving end of these terrible gifts!

As women age, they might become sensitive about “the change.” (You know what we’re talking about, ladies.) One of our friends mentioned that she knew a woman that got a “change”-themed book as a birthday present when she turned 50. The gift did nothing but poke fun at a sensitive subject for many women. What’s better for the 50-year-old women in your life? How about some candy from their childhood? Don’t remind them that they’re getting older—remind them of when they were young!

Many men lose their hair as they get older. Much like “the change,” many men are sensitive about this issue. Many men who are losing, or have lost, their hair don’t find the subject particularly funny. So steer away from comic toupees and spray on hair.

The worst over-the-hill gift of all? Adult diapers. Don’t even get us started on this one! We admit, this kind of humor can be funny—unless you’re the butt of the joke. (We meant that pun.) Unless you know the recipient will get a kick out of it, stay away from these kinds of gifts.

Your best bet is to get something fun and tasteful from Woodstock Candy.

We love birthdays! That’s why we have such a great selection of retro candy gift boxes. If one of your loved ones is celebrating a milestone birthday anytime soon, surprise them with a delicious box of retro candy from Woodstock Candy. It’s a sweet gift. (Okay, we had to say that.)

Every once in a while, we like to look at celebrities celebrating their birthdays in a given month. What famous people were born in March?

Have fun celebrating all those March birthdays! Don’t forget to make the day sweet with some delicious retro candy.

This blog post is for the ladies out there in Woodstock Candy land! If your hubby’s birthday is coming up soon, then you’re probably trying to think of ways that you can celebrate together. Make sure you put a great finishing touch on his special day with a retro candy gift box—but you need to do a bit more for the man you love! We’ve got a few tips to help you make your husband’s birthday something great. (Before you get too involved, see if he’s dropping any hints!)

Now that the weather is beginning to break, you could consider having a fun backyard party for your hubby. Decide on a menu and invite some of his closest friends. If you can keep the gathering under 10 people, you’ll create a more intimate setting. Get one of his buddies to be in charge of the grill and make some delicious barbeque. Treat everyone to some retro treats from Woodstock Candy.

Sporting Event
If your guy is anything like ours, he’ll love going to some sort of sporting event. If you’re strapped for cash, a minor-league baseball game might be the way to go. These games are usually scheduled months in advance, so you can get tickets ahead of time. He’s sure to love the thought!

Whatever you choose to do for your husband’s birthday, make sure you show him just how much you care. (After all, you’d expect him to do the same for you, right?)