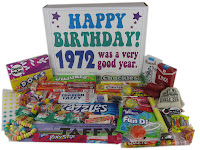 1972 was a great year! If you were born back then, you'll be having your 40th birthday soon. It seems like just yesterday that we were listening to music from 1972. These are the top 10 hits from that year:

1. The First Time Ever I Saw Your Face, Roberta Flack

7. Lean on Me, Bill Withers

8. Baby Don't Get Hooked on Me, Mac Davis

One of my all time favorite songs is
Heart of Gold by Neil Young, which came in at number 17.

Enough of music. If you need a birthday present for a 40 year old, we suggest a box of nostalgic candy. This box has over forty different kinds of retro candy that they'll remember from childhood. This 40th birthday gift of nostalgic candy makes a great conversation piece, and everyone will love it. 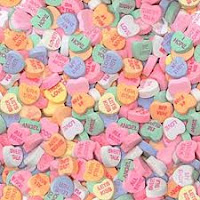 It wouldn't be Valentine's Day without those fun messages on candy hearts that you see everywhere! This February tradition was started by
the brother of the founder of NECCO in the 1860s. Remember, this was Abe Lincoln's era, so you know they've been around for a while. Candy hearts were originally printed with hand tools. It seems like a lot of work, but some people will do extraordinary things for love. It took about forty years before the ones we are familiar with went into production. Today, over 8 billion of these chalky hearts are produced annually. They're made from late February until mid January of the following year, averaging about 100,000 pounds a day. They sell out in about six weeks.
These are some of the messages you might have seen over the years:
My Way
All Mine
I Hope
#1 Fan
Sweet TalkAngel
Love
Whiz Kid
Pen Pal
Be Mine
Magic
URA Star
My Baby
Lets Kiss
Love Her
Lover Boy
For You
Lets Read
You & Me
Do Good
True Love
For You
New Love
Love You
Wild Life
Home Run
Call Me
Call Home
Purr Fect
Cutie Pie
Be Mine
Soul Mate
My Treat
Top Chef
Love Bird
Sugar Pie
Yum Yum
Chill Out
Heat Wave
Cool Cat
My Pet
All Star
Dream 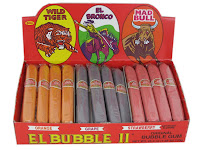 Bubble Gum Cigars were a favorite candy of mine when I was a kid; I would buy them for a nickel in the early '60s at the What Not Shop. The best thing about them was that they would last a few days. I would just bite a piece off and shove the rest back in the cellophane wrapper. Except for the bright colors, they resembled a real cigar pretty well. The shape was exactly like a real one. They even came with a cigar band; I would slide it off the cigar and wear it on my finger. Today Swell makes them in banana, fruit, mint, apple, orange, strawberry, and grape. They have your a baby.
Bubble Gum Cigars were first made in 1949, and were the first 5 cent bubble gum. This is another nostalgic candy that has been appealing to each generation, and will probably outlive us all.

Some nostalgic candy has been around for generations. All of these candies have been on the market for at least 85 years; now that's a long time! Here is a time line of other things happening in the United States when these candies were being introduced. This should give you an idea of how far back these nostalgic candies go; a lot of them were in stores before our grandparents were even born.

This says a lot about people's tastes; food trends come and go, but our love of nostalgic candy stays pretty constant. All of these candies are very simple and have an appeal to people of all ages. Many parents and grandparents who grew up with these candies pass along a tradition to the younger generation. That's a good reason to keep eating yummy things. Nostalgic candy is here to stay!