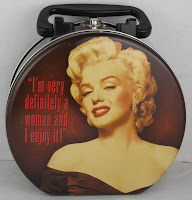 Vintage lunch boxes are part of the growing number of nostalgia items that are becoming popular today. There are so many items like the Superman lunch box that are gaining the attention of kids.

Many other adults are introducing their kids to some of the icons of their youth. The classic Marilyn Monroe, lunch box, for example is a rare find that turns up in antique stores. Some of these items can be found at low prices because they may not be in the best conditions.

There are other times, however, where these vintage lunch boxes are rather expensive. The Rolling Stones lunch box is a popular collector's item because the group was so successful. These boxes aren't made anymore and this is what makes them a piece of rock history. Some of them are in great condition because they have not been used. It's easier to find them online because there are so many sites that have multiple sellers.

Marilyn Monroe lunch box products are also very valuable because she was such a larger than life sex symbol. Few children would gravitate towards a Marylin Monroe lunch box today. This would be more of a collector's item for adults that were in search of entertainment memorabilia.

Children today will still find interest in the Superman lunch box. This is a vintage item, but it easier to find. It can also be found at a lower price because there were so many made. Superman was around for a long time. Tons of these boxes were made because this was also a cartoon character.

An Elvis Presley lunch box is a hot item that would be a little more costly simply because it is Elvis memorabilia. Everything that Elvis "the King" Presley is printed on becomes a bestseller. People buy the albums when they are remastered. Tons of people still tour Graceland every year to see where this pop icon lived. It is only natural to assume that the Elvis Presley lunch box would also be a popular item.
The Rolling Stones lunch box is about the only other music act that would produce similar fan appeal. Fans of the box would not be very likely to use the box. Most adults would be more likely to simply keep these items on display.

On the other end of the spectrum there are sellers. These are the people that have kept their boxes for a long time. For whatever reason they are interested in getting rid of the boxes. Some people sell them because they don't have any use for them. Others may sell these items in efforts to make some money. Most sellers know that these are rare finds. There are a few sellers, however, that are willing to part without these items for little or nothing. These are often sellers that do not know the value of the items that they have. A person interesting in obtaining items like this may get lucky. They may find a real deal online.