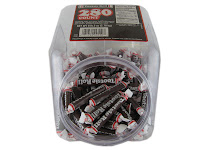 Did you know the nostalgic candy maker Tootsie Roll Industries is on the New York Stock Exchange? It's been listed since 1922, originally under its old name, the Sweets Company of America. On August 26, 2011, the TR stock was traded at $25.11


The Tootsie Roll company has been around since 1896 when Leo Hirschfield first started making candy in New York City. He wanted to make a chocolate flavored candy that wouldn't melt in the heat. Maybe you've noticed that Tootsie Rolls still hold their shape and don't melt all over the place in the hot sun. They have a long shelf life and ship really well, too. This candy, made from an old family recipe, is named after his daughter Clara's nickname, "Tootsie." Just imagine if she didn't have a nickname. The Clara Roll would be a household name today instead of Tootsie Roll! During WWII, Tootsie Roll candy was shipped overseas as part of the G.I.'s rations, where they were well appreciated by anyone who get hold of them. Doscher's French Chew Taffy candy, Juicy Fruit Gum, and Goetze Caramel Creams have all been around slightly longer than Tootsie Rolls, but not by much. It goes to show, if you have a good product and a good business sense, you can be in business for generations!

Because there is so much nostalgia associated with Tootsie Rolls, one is added to almost every one of our retro nostalgic candy gift boxes.