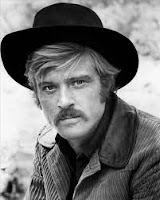 It's hard to believe that Robert Redford is celebrating his 75th birthday today. He's aged so gracefully. To honor his birthday, tonight would be a great time to watch one of the movies that he starred in. We recommend "Butch Cassidy and the Sundance Kid" (1969), "The Sting" (1973), "The Way We Were" (1973), and "Out of Africa" (1985). If you're a baby boomer, you probably remember when these movies were released. Time flies when you're having fun!

Because "Butch Cassidy" coincides with the anniversary year of the Woodstock Festival, and our town is famous for the festival that didn't take place here, we have to go with that one. Before you watch your Robert Redford film, grab some nostalgic candy for a trip to the past. Our old time favorites are Candy Cigarettes and Pixy Stix. These are timeless classics just like Robert Redford!
Happy 75th Birthday to a great actor.