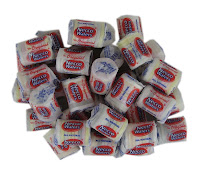 Necco Wafers is a retro candy I remember well from my childhood, probably because it was one of my least favorites. It tasted chalky to me back then, and wasn't sweet enough for my young palate. It was a candy that seemed like it was for adults, so I always chose the more sugary, sticky candy for kids from the penny candy store.


Every once in a while I'll get a craving and eat a small pack of Necco Wafers, because now I have an appreciation for them, and I kind of like them as well. Orange, lemon, clove, chocolate, cinnamon, wintergreen, lime, and licorice are the eight flavors that they come in. Necco Wafers are the oldest United States product continuously manufactured in an unchanged form. And that includes everything, not just candy! The company sells four billion Necco Wafers each year which goes to show that a lot of people are still eating them. It's the kind of retro candy that grandparents will pass on to their grand kids. Necco Sweethearts candy, which are sold around Valentine's Day, are made from the same recipe. There's something endearing about a candy that has been around for so long, around 110 years!