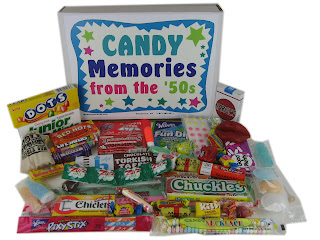 It's hard to resist a good piece of candy. Everyone has their favorites. There's just something about the taste of the candy of the 1950s that brings back nostalgic memories. A lot of great things happened in the 50s. Even if you weren't born during that time, you might remember learning that during that decade, Elvis had his first recording, Disneyland opened and Mr. Potato Head was invented along with everyone's favorite, Silly Putty. What a fun decade the 1950s were. So it should come as no surprise that the candy of that decade was great.

Who remembers back in the day when you could actually buy penny candy? Times may have been tight during the 50s but the economy was starting to boom, and a dime would get you a bag full of your all time favorite candies. As anyone from the 1950s will tell you, candy was a big hit. There are a lot of good choices for candy today, but none can compare to the candy of the past. There were a lot of choices when it came to 1950s candy; everything from chocolate to hard candies and everything in between. Some great candy of the 1950s include such favorites as Boston Baked Beans, Zotz, Mary Jane, Good & Plenty, Gold Nugget Bubble Gum, Chick-O-Stick, even candy cigarettes and Bubble Gum Cigars were a hit, made you feel as if you were really smoking. Oh, such memories…

Perhaps you have a friend or family member that can recall going to the corner store when they were growing up and picking out some of their favorite candies. They might have enjoyed being able to get two pieces of candy for a penny. Back then that was a lot. Sure there are plenty of good candies on the market today and if you're lucky you can still find some of the classic candy of the 1950s on store shelves. The prices are much higher now, but the taste should still be the same. If you're looking for a great gift to give someone, why not consider a gift of nostalgia by giving that special someone a gift full of candy from the 1950s? Let them reminisce about the good old days. Such a gift would also be a wonderful way to introduce a younger person to the wonderful world of candy from back in the day. Candy always makes a yummy treat for kids of all ages.