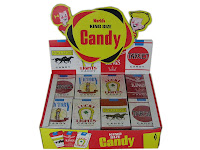 Do you remember buying old fashioned candy cigarettes sometime during your childhood? Back in the 1960s, they were seen as pretty harmless, and almost every kid was allowed to have fun with them. Maybe the kids who couldn't have them had parents who just plain deprived them of candy in general.


A lot of people are surprised that candy cigarettes are still around. Some people think that they were taken off the market or banned, but that's not so in the United States. If you live in another country like the United Kingdom, Kuwait, Saudia Arabia, or Finland, you might not be able to get them. If you lived in North Dakota between 1953 and 1967, you'd have to cross state lines to buy candy cigarettes, hurry up and eat them before you came back, or bring them in as contraband. The length people would go for their candy fix! Today in the United States, you can find them mainly in smaller stores near the bubble gum or trading cards. Many bigger stores don't want any controversy, so most of the time they don't stock them.


Candy cigarettes aren't "politically correct," but who cares. It's the nostalgia that's important, and they have great memories for a whole generation of people. When I was a kid, they used to make them a with a red tip at the end. Today, they're just pure white, still have that chalky taste, and go by the name "candy stix." I'm sure they've been renamed so they can seem a little more acceptable. Some brands just say "candy" on the box, but the graphics resemble Lucky Strike, Viceroy, and Marlboro packs so there's no mistaking the content. Candy cigarettes, or candy stix, hold very dear memories for a lot of adults who grew up with them, and our mission is to bring back your childhood memories one candy at a time!