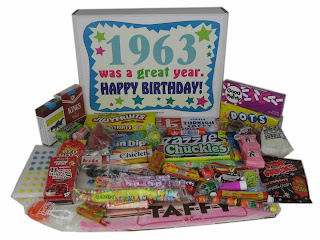 The 1960s was a decade of radical change in American society. From the Beatles to the Vietnam War, protests, and women’s lib, energy levels ran high, and the wide variety of candy from the 1960s reflected some of that vitality.

Although only four new candies were introduced during that decade - Blammo bubble gum, Lemonheads, Starburst Fruit Chews, and Sweetarts - they joined a wealth of others that seem to have been created for the moods that swept the nation.

For example, the 1960s saw the birth of flower power, hippies, and tie-dye clothing. Many of the candies mirror that burst of color:

The 1960s also were explosive, beginning with the Cuban missile crisis and progressing through the Vietnam war. As protesters took to the streets and college campuses, some of the candy from the 1960s seemed to mirror that tension.

Pop Rocks, for example, are a hard candy processed with carbon dioxide. These candies melt in your mouth and pop as the tiny gas bubbles burst. Atomic Fireballs are spicy, hard round candies that can fire up your mouth with their rich cinnamon flavor. Zotz, an Italian candy that found its way into the states in 1968, has a fizzy center surrounded by a hard candy.

One of life’s simple pleasures is blowing a big bubble, and the 1960s had great poppers. Gold Mine Bubble Gum, Blammo Bubble Gum (discontinued), Dubble Bubble Gum, and Bubble Gum Cigar allow kids young and old alike to try for the biggest bubble on the block. The more sedate chewing gum Chiclets is available for those who want a more relaxing experience.

Chewy candies were not in short supply during the 1960s. Some of the retro offerings included Giant Taffy, Tootsie Rolls, Black Taffy, Bonomo’s Turkish Taffy, Bit-O-Honey, Charleston Chew, and Sugar Daddy Jr. For the look of a cigarette without the nicotine and other harmful ingredients, brands like Kings and Stallion were found in realistic boxes.

For those looking for lasting sweetness, several hard candies were marketed. Kids of all ages can still enjoy Root Beer Barrels, Lemonheads, and Gobstoppers, the jaw breakers that can be enjoyed for days.

Like Gobstoppers, candy from the 1960s has withstood the test of time. Fortunately, nearly all the sweet treats from decades ago are still for sale today.