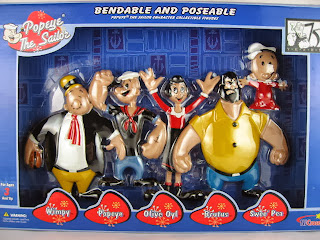 This song is still known in 2013, by a young, technologically advanced generation. The Popeye the Sailor character, has been a part of our media cultural for over 80 years. His spinach obsession,which gave him supernatural strength, his laughter, and his adventures with Olive Oyl, Sweet Pea, hamburger hungry J. Wellington “Whimpy", Bluto/Brutus, and other characters, are forever in our memories and heart.

Popeye was originally created by E.C. Segar and was introduced to the world in 1929. In the 1930's the Popeye character was a popular comic strip and remains in some national newspapers today. In 1935 the moniker, Popeye the Sailor was heard on the radio and ran until 1938. In the 1950's, Paramount Picture Studios made Popeye, an animated TV cartoon hero. These short films were so popular with children, adults and the spinach industry, that a membership club was established and a Saturday movie matinee was held in theaters.

A new generation is learning about Popeye the Sailor through DVDs and merchandise which continues to be sold everywhere. Licensed Popeye gifts continue to be manufactured, in the novelty likeness of:

There are many retro Popeye collectors who handle 100's of products from the 1930's, featuring toys, puzzles, magazines, piggy banks, comics, handkerchiefs, scarves, toothbrushes, and much more. Popeye enthusiasts enjoy buying and collecting modern day Popeye gifts and collectibles. With the Internet, there are many websites dedicated to this character's history and many novelty sites, as well as mail order companies that feature quality-made items.

The legend of Popeye the Sailor lives on in the varied gifts that are given to family, friends, and co-workers. A limited edition Popeye Shaving Collection featuring a hand-made signature tin can, is sold at high end retail stores and at certain brick and mortar locations. Popeye remains a popular licensed character in major theme parks and resorts in the United States and at Universal Studios in Japan. Clothing gifts for adults and children by Dolce and Gabbana, Benetton, Gap, H&M, Zara, and Miss Sixty, feature the Popeye the Sailor and Olive Oyl iconic logos in their shirts, cuff links, ties, socks, etc.

Children will enjoy the Popeye game apps and adults will love receiving Popeye and Olive Oyl VISA prepaid gift cards. Baby boomers would get a kick out of a bendable set of Popeye and the gang figurines. The beloved casual sailor image of Popeye has gone exclusive, whimsical, and customized, with the Popeye Yachtmaster Rolex Watch by London's Bamford Watch Company.

Popeye is a special cartoon character that will always be a part of American culture and history, yet shared with the world. Popeye gifts are available for all holidays, birthdays, anniversaries, and special occasions. Rather than cartoonish, gifts with a Popeye logo are considered to hold fond memories for those who watched this cartoon character on TV, and whimsical for a new generation.