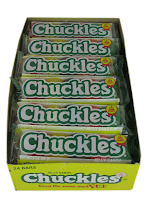 Chuckles candy is one of those old time candies that you either love or hate. It's been around since 1921, and according to my math, that's 90 years! That's a long time for a simple jelly candy to survive. Farley's and Sathers has been the owner since 2002, and they're still making them like I remember from when my grandma used to buy them for a nickel. Still the same flavors: licorice, lemon, orange, cherry, and lime. Even the packaging hasn't changed much. I never bought Chuckles candy when I was a kid, but I've grown to appreciate them now. It's a candy that appeals to an older crowd, although my nineteen year old daughter absolutely loves them! At Woodstock Candy, we put a pack of Chuckles candy in most of our retro candy boxes, because we know you will have encountered them somewhere during your childhood. Even if you didn't eat them as a kid, chances are that your parents did. Each pack contains five individual pieces, neatly aligned in a row. They're coated in sugar, and aren't overly sweet. You can make them last a long time, and they don't get sticky and they won't melt. A lot of New Yorkers who have moved to Florida say they are hard to find there. But here in New York, they're easy to find; probably because we love them so much!