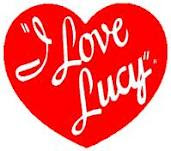 On October 15, 1951, exactly 60 years ago tonight, the first episode of "I Love Lucy" aired on CBS. It was called "The Girls Want to go to the Nightclub." The hit comedy starred Lucille Ball and her real life husband Desi Arnaz. I'm sure most Americans are familiar with "I Love Lucy" because it was hugely popular over the years, ran for 9 seasons, and today still continues to entertain one generation after another. It is one of those iconic shows that still makes everyone laugh. Even if you missed those 9 seasons way back when you can still watch reruns any day of the week on the Hallmark channel.
The most watched episode ever was "Lucy Goes to the Hospital" for the birth of her son Ricky Jr. It coincided with the actual birth of her real son with the same name.
My favorite episode is "Switching Jobs," also known as the Candy Factory episode. It has Lucy and Ethel working on a speeding conveyor belt wrapping chocolates. They can't keep up, so they stuff chocolate in their mouths, in their hats, and down their shirts. It's really, really funny. If you like this episode, you might like the I Love Lucy tin bank depicting the scene.
"I Love Lucy" shows how every day situations can be turned into great comedy.
Another fun episode is "Vitameatavegin," where Lucy wants to be in one of Ricky's tv commercials. She gets her way, but ends up having to taste the vitamin syrup with a high alcohol content over and over again.
Happy 60th Anniversary to "I Love Lucy!" We wouldn't be the same without you!