Woodstock Candy Posting Page
Friday, May 17, 2013
The Wonders of Spinach: The Immortal Popeye 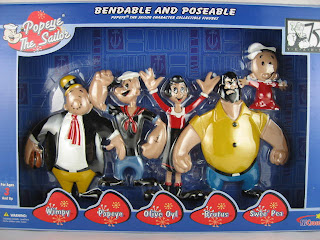 Popeye the Sailorman was born in the comic strip Thimble Theatre and became their star in a manner of moments. He quickly rose in popularity all the way up to the silver screen, and then onto the TV screen with those black and white cartoons, with the help of Max and Dave Fleisher in 1933.

Who was this seemingly simple man? Well, for one, he was very intelligent even if he did not show it off; he demonstrated skills that surpassed scientists and investigators, especially if Olive Oyl's life depended on it. Bluto, as you will remember was a constant villain who kept trying to take Olive Oyl away from Popeye. Olive Oyl was such a gullible girl, and at first, she always fell for Bluto's advancements but then quickly realized that she belonged to Popeye, especially when he came tooting his tune, from that pipe that never left his mouth, except to consume that magic elixir of strength -  SPINACH!

It's wonderful to remember all of those great television shows, comic strips and radio stories that Popeye was a part of. He was a hero to Olive all the time but then came the time when Popeye sailed the Atlantic Ocean to help the Americas beat the enemies of the States during World War II. Popeye had a number of mediums by which he reached his fans besides his cartoons because he also had a toy line. These toys were great, very realistic, and represented the Popeye of the comics or cartoons. There were other characters that were also represented in toys such as Wimpy; you remember him right? The guy who loves to mooch and promise payments tomorrow in his quest for hamburgers today? Don’t forget Bluto's brother, Brutus. Who can forget about Swee'Pea? Yeah, that wonderfully mischievous yet perfectly suited child of Popeye that was dropped off at his door but had absolutely no connection to Olive.  Those were innocent days, for sure.

Don't worry; these toys are 3 dimensional and fully realized in Technicolor, the better to enjoy the detail of their craftsmanship. They have much more value to them than mere toys; they transcend time. They can take those who remember Popeye's golden age back to when they were children. A time when they would beg their parents for cans of spinach to gain superhuman strength and save Olive Oyl...usually their sister. That is what Popeye gifts are capable of...they are capable of bringing forth the beauty of a memory.

Popeye gifts are a wonderful little present for a baby Boomer but Popeye gifts are not the only thing you can think of, of course. Don’t forget the wonderfully innocent yet sexy Betty Boop? Mortimer the mouse; he evolved into Mickey Mouse. On that same note, Donald Duck made a splash during those days. Which, of course leads to the question – why didn’t Donald wear pants and Mickey not wear a shirt? What about Felix the Cat  or Superman, who was born in 1933. Who can forget Buck Rogers or Dick Tracy? The golden age has passed but has not died and will survive the times because memory is eternal and it lives within us...sometimes all we need is a little toy to bring out buried memories.