Woodstock Candy Posting Page
Sunday, November 6, 2011
75 is not Over the Hill to NYC Marathon Runners 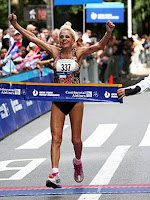 Who's to say that a 75 year old is over the hill? Some people claim that after you reach 50 or 60 you're over the hill. To most, that would mean that when you reach 70, you've definitely gotten there. Don't confuse the eighty-eight runners over 75 years old who signed up for the New York City Marathon to be over the hill. These runners are proof that at any age you can be healthy with an active lifestyle. Take for example, Ginette Bedard who is 78. She started running when she was 68, and ran in the marathon today. Richard Gonzalez of New Orleans is 79, and he's run 105 marathons.

So the next time anyone talks about being over the hill, remind them that they need to get out there with some older folks who can set a great example for them. Sometimes it's your frame of mind that makes you feel older than you really are. When that milestone birthday comes your way, take off your over the hill birthday party hat and change it to a "young at heart hat!"