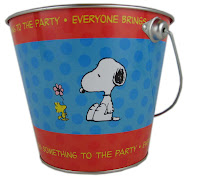 Charles M. Schulz, the creator of the Peanuts comic strip, would have been celebrating his 89th birthday today. Unfortunately he died in 2000, but his lovable characters can still be seen today in syndicated comic strip sections. Peanuts appeared in more than 2,500 newspapers for almost fifty years. Most everyone is familiar with Lucy, Charlie Brown, Peppermint Patty, Linus, Woodstock, and Snoopy.

When Schulz was a kid he drew a picture of his family dog, Spike (not a Beagle), who ate pins and tacks. He sent the drawing to Ripley's Believe It or Not! where it was published.
He drew in school, but had artwork rejected from making it in his high school yearbook. How foolish they were!
Schulz's characters are loved by people of all ages. There are statues, lunchboxes, mugs, books, sweatshirts, books, clocks, and all other kinds of knick knacks depicting Snoopy and the rest of the gang. Happy Birthday remembrances, Charles Schulz.