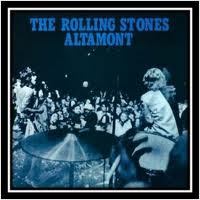 The year 1969 may be nostalgic to many people. After all, it's the year that the Woodstock Festival took place, and so it became the era of peace and love. But on the other side of the country in California, forty-two years ago today, the Altamont music festival took place. On December 6, 1969 a free show at a speedway in Livermore attracted 300,000 people. Ike and Tina Turner, Jefferson Airplane, Santana, The Flying Burrito Brothers, Crosby, Stills, Nash, and Young, The Grateful Dead, and The Rolling Stones headlined.
Hell's Angels provided the security, which in hindsight wasn't such a good idea. When the Stones were playing "Under My Thumb," a man approached waving a gun and started shooting. A Hell's Angel stabbed and stomped him to death. Three more people died at the concert.
The Rolling Stones left via helicopter not knowing what had just happened. The Grateful Dead decided not to play because of the violence. This concert was filmed and was part of a documentary called "Gimme Shelter" featuring the Rolling Stones. They have been around for 49 years! A fun Rolling Stones magnet set depicts four of their famous album covers.
Altamont was a far cry from the peaceful Woodstock Festival months earlier, but 1969 was certainly a great time in music history.